It all started with “Sesame” the Puppet.

Ola Ibrahim, a 21-year-old female with disability participated in the “Art to Heart” program for the first time in her life. Her disability is a result of oxygen deprivation at birth. Her disability prevented her from socializing and forced her to stay at home due to lack of social activities and the sort of initiatives and organizations able to accommodate the needs of children with disabilities.

Ola’s mother says: “Ola spends all of her time at home. There is not much to be done during the day to fill her free time, especially due to the lack of artistic and cultural activities for persons with disabilities, especially females, over the age of 16. Moreover, there aren’t any cultural or artistic centers that offer programs to mainstream PWD in the society, let alone develop their talents. We were overwhelmed with joy when we received an invitation to participate in the puppets making program, implemented by a newly founded organization in Nablus called “Art to Heart”. I immediately registered Ola in the program, and accompanied her in all the weekly puppet-making sessions.

Through the puppet-making program, Ola was able to create her first puppet, which she named “Sesame”. This puppet helped her express herself more, open up to others, and overcome her shyness. “Sesame” became Ola’s voice, and it was through this voice that she was able to represent herself among the group, socialize and interact, all of which, in turn, made her far happier than before.

The training programs Ola joined boosted her communication skills and self-confidence, and not only did her happiness and sense of inclusion grow, she started taking greater pride in herself. She was empowered by ability to socialize with other participants at the various workshops such as handicrafts, ceramics, painting, strings art, drawing on glass, as well as her participation in the singing choir “Art to Heart”.

Ola began to love life, due in large part to the simple though profound pleasure of having something to look forward to, as well as a renewed sense of belonging and hope. Ola’s mother added: “you can see her all excited to wake up early, get ready and go to the training, she couldn’t wait for the day of the training.” It was as if it brought her soul back to life.

“During Art to Heart summer club, she used to wake up very early. She would even prepare her clothes the night before. She would ask me repeatedly, ‘Mom, is it time yet?’ I noticed she became more social, nowadays she even knows how to better match the colors for her clothes. More importantly, despite all the difficulties she has, she became able to form a complete sentence to communicate with others which used to be so hard for her. She also made friends with the participants of the program. She used to wait eagerly for the trainings to meet them again.”

Ola’s family played a significant positive role constantly encouraging her and helping her participate in Art to Heart activities. Moreover, what simply started as participation in recreational and tutorial activities, may turn into a small project to generate an income for Ola. Ola’s mother said: “I am seriously considering starting up a handicraft project in the near future for Ola and I, as handicrafts and embroidery are appealing for Ola and she is very creative in this field.” She added, “I noticed the positive impact on Ola’s personality, and her sense of pride in herself. Her hand function and motor skills have become more precise and quite better than before.”

Ola is one of many persons with disabilities benefiting from such an enabling environment as the community of “Art to Heart”. For months, the activities that we offer have contributed in no small part to creating a safe and impassioned environment for PwD, developing a sense of belonging, invlusivity, and productivity through artistic and cultural activities and in so doing, playing a part in the welfare of some of society’s most vulnerable –and underrepresented –citizens. 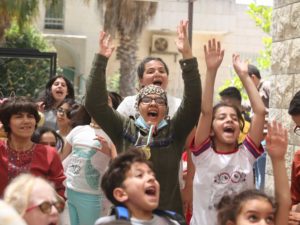 Ola was able to create her first puppet, she named it “Sesame”.

Page load link
We use cookies on our website to support technical features that enhance your user experience. We also collect anonymous analytical data, as described in our Privacy Policy.
I agree
Manage consent

This website uses cookies to improve your experience while you navigate through the website. Out of these, the cookies that are categorized as necessary are stored on your browser as they are essential for the working of basic functionalities of the website. We also use third-party cookies that help us analyze and understand how you use this website. These cookies will be stored in your browser only with your consent. You also have the option to opt-out of these cookies. But opting out of some of these cookies may affect your browsing experience.
Necessary Always Enabled
Necessary cookies are absolutely essential for the website to function properly. These cookies ensure basic functionalities and security features of the website, anonymously.
Functional
Functional cookies help to perform certain functionalities like sharing the content of the website on social media platforms, collect feedbacks, and other third-party features.
Performance
Performance cookies are used to understand and analyze the key performance indexes of the website which helps in delivering a better user experience for the visitors.
Analytics
Analytical cookies are used to understand how visitors interact with the website. These cookies help provide information on metrics the number of visitors, bounce rate, traffic source, etc.
Advertisement
Advertisement cookies are used to provide visitors with relevant ads and marketing campaigns. These cookies track visitors across websites and collect information to provide customized ads.
Others
Other uncategorized cookies are those that are being analyzed and have not been classified into a category as yet.
SAVE & ACCEPT
Skip to content
Go to Top